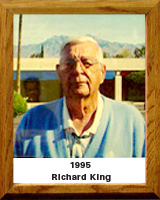 As a high school basketball coach in New Mexico and later in Tucson (Tucson and Rincon high schools), King had a winning record of over 75 percent, including the 1965 Arizona state championship and several district and conference championships as head coach at Rincon.

For 15 years Dick was athletic director at Rincon High School. His friend and former colleague, Alice Mayfield, says of Dick: “He was the type of coach you would like to have as your son’s, daughter’s or grandkid’s leader.”