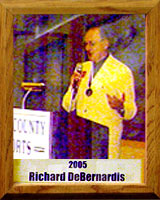 Richard grew up in Brooklyn, New York. With a BA from UCLA, and a Masters from Harvard, he became an educator in Math and Learning Disabilities at UCLA and the University of Alaska. It was in Alaska where he became a dedicated tour bicyclist riding from Alaska to Mexico (2,218 mi in 40 days). On 7/7/77, he climbed Mt. Whitney for the 7th time-the tallest mountain in continental US at 14,495 feet. From 1978-1979, he earned his first GUNNESS WORLD RECORD by being the first person to bicycle the Perimeter of Japan’s 4-main islands, 6,325 Miles in 77 days.

In the early 1980’s Richard moved to Tucson, where he has lived ever since. When he came here, he continued his commitment to bicycling by heading up fundraising bike rides and serving as a President of the Greater Arizona Bicycling Association (GABA).

In 1983, he founded the Perimeter Bicycling Association of America (PBAA), and has been its president ever since. The PBAA started “EL TOUR de Tucson” fundraising bicycling ride that was a 10-mile perimeter ride around Tucson. From few participants in its first year, the ride now has more than 7000 participants each year and has raised over $20+ Million Dollars for non-profit agencies such as the Arthritis Foundation, American Diabetes Association; the University of Arizona Alumni Association, Tu Nidito and others. It is the biggest ride of its type in the USA and the PBAA has created other rides. It is rare to find any Tucsonan that has not been in a PBAA ride; volunteered to help at one; or know some rider.

Richard has put Tucson cycling on the map.