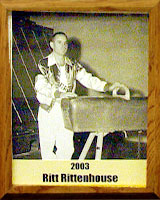 Preston “Ritt” Rittenhouse attended Catalina Junior High where he was the school’s first all-city athlete in baseball. He went to Tucson High School from 1944-47 where he lettered in baseball. He was a member of the 1945-46 squad that is often referred to as the “Best Ever in Arizona.” While at Tucson High he also played American Legion Baseball at Morgan McDermot Post #7 where his team was sectional champion several times and ranked fourth in the nation. He also was the AAU trampoline champion for the state of Arizona in 1948.

As a student at the University of Arizona, he participated in baseball and swimming. In 1951 he was the Border Conference diving champion.