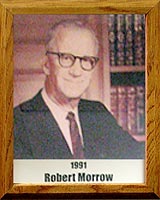 When Dr. Morrow became superintendent of Tucson Public Schools in 1941, the sports facilities were almost non-existent. Dr. Morrow changed that as rapidly as possible and when new schools were built (and there were many during his years of service), the areas that related to recreation, physical education and team sports were in the plans (fences, outdoor courts, grass, bleachers, indoor courts and lights). He also saw a great need to balance education with scholastic sports, and his attendance at Tucson Public Schools’ sporting events was legendary. Among Dr. Morrow’s many cherished memories were the long and arduous efforts to get the Arizona School for the Deaf and Blind admitted to the Arizona Interscholastic Association; seeing one of the first Tucson athletes (Angel Acuna) become an All-American; watching the Tucson girls’ team tumbling at the World’s Fair in San Francisco; blind boys winning ribbons in wrestling; and Angela Flores becoming an internationally renowned dancer (all but one of her partners were men with hearing). It was largely through Dr. Morrow’s efforts that so many boys and girls had the opportunity to be involved in sports. He kept playgrounds open after school with staff to supervise and used his own car to get kids to games during World War II. Dr. Morrow was “one of a kind…truly a ‘super’ player on anybody’s team.”