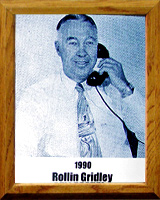 “Grid,” as he was known throughout football circles, was a positive influence on many youngsters, since he stressed classroom excellence, as well as ability on the playing field. One of his better-known players who went on to international acclaim was Frank Borman, who became an astronaut and later president of Eastern Air Lines before retirement. Gridley’s Tucson High School football teams won a state record 32 consecutive games and five Arizona championships. He first started coaching basketball at THS after finishing as a University of Arizona Wildcat gridder. His basketball team won the state title in 1933-1934, after which he became football coach in 1935.

THS became a perennial state power under Gridley’s tutelage. He became principal at Catalina High School when that school opened in 1959, a job he held until his 1969 retirement. Gridley Middle School was named in his honor.