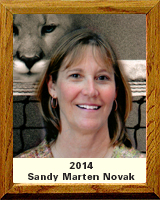 Sandy Marten Novak grew up in Chicago and went to Carthage College where she played volleyball and basketball earning All – Conference Honors in volleyball. She taught and coached in Illinois until moving to Tucson in 1987 where she was hired to coach girls’ track and girls’ volleyball at Sahuaro High School.

Her track teams won regional championships in all but one year of her 10 years as the head track coach at Sahuaro. She coached Fawnia Crump to a State Championship in the 100-meter dash and coached many state top ten finishers.

As the girls’ volleyball coach from 1988 to 2006 Sahuaro’s volleyball teams won 10 regional championships, state qualified all but one year and were state runners up in 4A twice and 5A once. Her overall regular season record for coaching girls’ volleyball is 402 wins – 112, a .782 winning percentage.

Sandy has been on the State Volleyball Advisory Board for the AlA, has been a keynote speaker on women in athletics at the Arizona Interscholastic Athletic Administrator’s Association annual conference, and she has had a volleyball drill published in the American Volleyball Coaches Association magazine. Sandy has also been the full-time athletic director at Sahuaro for the last 15 years, while teaching and coaching. She has worked on many committees for TUSD, including the Leadership program for athletes, designing the new gyms for the schools in 2008, and was the committee chairman for the TUSD code of conduct for all athletes.

Sandy was inducted in to the Sahuaro Cougar Hall of Fame in 2011. She is a well-respected coach, teacher, and athletic director in Tucson as well as the State of Arizona.