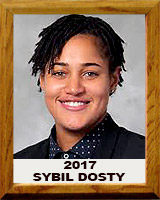 Dosty was a Street and Smith Freshman All-American and was invited to the Nike AllAmerican Camp following her freshmen year. Sybil was First Team All-State 2001-2004 and earned All- Conference Player of the Year honors in 2003 and 2004. She was dubbed the Gatorade Arizona Women’s Basketball Player of the Year in 2004 along with being selected to play in the Adidas All- American game the same year. The honors were numerous for the 6-3 center, as she was also named to the Street and Smith All American team in her senior season. She was named the Player of the Year by The Tucson Citizen, Arizona Preps, and The Arizona Informant in her senior year. Lastly, she was also named Player of The Year by The Arizona Daily Star her sophomore, junior and senior season. While at Salpointe she lead the Lancers to the State Championship game in 2003 and the State Semifinals in 2004.

After high school Sybil took her talents to The University of Tennessee playing under legendary coach Pat Summitt as part of the number one recruiting class in the nation. While at Tennessee the team advanced to the Final Four her freshmen year and clinched two SEC tournament championships back to back in 2005 and 2006. Dosty led the Lady Vols in shooting percentage for two consecutive seasons (.59). After two years in the program she ultimately made the decision to transfer.

Sybil played at Arizona State University from 2007-2009 after sitting out a year due to transfer rules and a knee injury. Dosty led the team in field goal percentage (.54) in the 2007-08 season, lead the team in rebounds and was among the top in the conference for blocked shots throughout her career as a starter for the Sun Devils. ln her senior season Dosty was named to the PAC-10 All-Academic First Team and named the PAC-10 Women’s Basketball Scholar-Athlete of the Year while working on her Master’s Degree. The team advanced to the NCAA tournament both seasons and to the Elite Eight in her senior season falling to the University of Connecticut.

After completing her collegiate career Sybil went on to play professionally overseas in Spain, Slovakia, Thailand and Poland. In the offseason she coached and trained youth and high school players.

Dosty has begun a career in coaching and her first assistant position at the Division-1 level was with the women’s basketball program at Seattle University in 2015. She also had a short stint at the University of Hawaii in 2016.

This past year Dosty was a volunteer assistant at Pima Community College for the Lady Aztecs. Sybil currently lives in Tucson and plans to continue her coaching career in the upcoming season. Sybil Dosty’s younger sister, Whitney Dosty, played volleyball at The University of Arizona and also enjoyed a pro career.