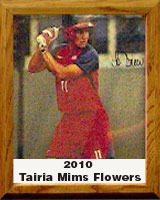 Tairia’s spectracular softball career started at Salpointe Catholic High School. She was a four-year starter and was an all-star selection all four years. Salpointe won the state title in her freshman year and finished second in her senior season.

Tairia enrolled at UCLA and hit a three-run home run in her first collegiate at-bat as a freshman. She started every game as a freshman, and had the second highest batting average in the women’s College World Series for the runner-up Bruins. As a sophomore, Flowers was a second-team All-America selection and first-team All-Pac-10. The Bruins finished second in the World Series. In her senior season, Flowers was first-team All-Pac-10, All-American, and played on the All-College World Series team. UCLA won the national championship. Flowers finished second in career home runs (61) at UCLA, second in career runs batted in and first in career doubles.