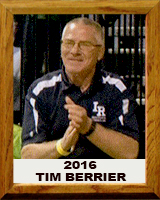 Tim Berrier won an Iowa high school state wrestling championship and received a wrestling scholarship to Iowa State University. He became a starter in his red shirt freshman season, but a season ending injury led to a transfer to the University of Arizona. He was a starter for the Wildcats in what was the final season that Arizona had a varsity wrestling program.

Berrier spent his last two seasons of eligibility as an assistant coach at Catalina High School. As of 2016, Berrier has coached 30 seasons—23 of them as a head coach at 3 different high schools in Tucson. He has led his teams to a 426-118-3 record. In the last 19 years, 16 of his teams have finished in the top 6 at the state tournament including 4 state championships, 3 runners-up and four 3rd places. He has coached 31 individual state champions and 22 runners-up among his 100+ state medalists.

Berea has been a national coach for Team Arizona and has also been selected to coach the senior all-star meet several times. He has received the Southern Arizona coach of the year award 8 different times. He has been named state coach of the year 4 times by Wrestling USA magazine, 3 times by the National Wrestling Coaches Association and twice by the Arizona Republic.