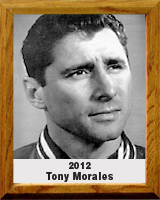 Tony Morales graduated from Douglas High School in 1943 and lettered all four hears in football, basketball and baseball, plus two years in track.

After serving in the U.S. Navy in World War II, Morales attended the University of Arizona where he played both baseball and basketball. In 1950 he was an All-American baseball selection, the first Hispanic-American to be so honored.

In 1969 Morales moved to San Diego where he coach baseball at Lincoln High. He is currently retired and living in Hemet, California.