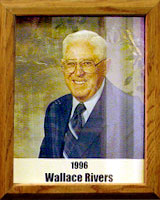 When the Sunnyside Little League was formed in 1956, Wally Rivers was there to help out, clearing the rocks and weeds to build a baseball diamond near South 12th Avenue and Drexel Road. “Mr. Little League” came to Tucson from Everett, Mass., in 1951 with his wife Rita and their five young sons packed in the car and Wally chugging behind with their furniture loaded on an old vegetable truck. “It took 5 ½ days and we looked like gypsies,” says Rita. A volunteer for Sunnyside Little League for more than 40 years, Wally has been scorekeeper, safety officer, player agent, coach, manager, concessions chief, groundskeeper, equipment manager, league vice president and a ready shoulder to cry on. “My satisfaction comes from helping out,” he says. What does Rita say about his passion for Little League? “You’re talking every night of the week, every year after year after year. When he dies, I’m going to drive him around the park three times.” To this Wally laughs. “Don’t drive me around. Just bury me in center field.” In a special ceremony, that same old ball park on South 12th where Wally started helping out more than four decades ago got a nice new name: Wally Rivers Field.