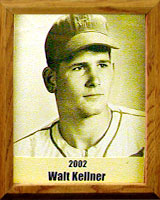 Walt started his sports career at Amphitheater High School where he played baseball and football for four years.

At the University of Arizona he excelled at baseball. In 1949, he made the National Semi-Pro All-Star team.