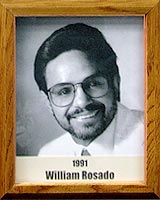 Rosado, who started his outstanding athletic career by winning the National AAU Age Group Judo Championship at age 13, became a two-time state wrestling champion while attending Santa Rita High School (1971-73). He went on to earn All-American honors while wrestling in the 118-pound class at both Phoenix College and Arizona State University. Bill has the honor of being the first wrestler in the U.S. to win a National Junior Olympic title (1976) while representing the Sunkist Kids Wrestling Club. He was captain of the Sunkist Kids in 1984. Bill also is the first Arizona wrestler to win a National AAU Senior Freestyle title and the first to represent the U.S. in the Olympic Games (Montreal, Canada). He has been a member of seven U.S. National Wrestling Teams and has won four National Senior Freestyle Championships. He is the first Arizona wrestler to win a gold medal in freestyle in the Pan-Am Games (San Juan, Puerto Rico, 1979). A major highlight of Bill’s career was winning the bronze medal in the 105-pound class in the 1981 World Freestyle Championships in Skopjke, Yugoslavia. He is the first and only Arizona wrestler ever to win a medal in a World Freestyle Wrestling Championship. Bill was inducted into the Arizona Wrestling Hall of Fame in 1987.