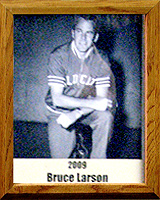 Bruce was head basketball coach at the University of Arizona from 1961-72 and before that was an assistant coach under Fred Enke at Arizona for two seasons.

Prior to coming to Tucson, Bruce was basketball coach at Eastern Arizona College (1951-57) and took his team to the Junior College national tournament four times, finishing second in 1957. At EAC, he also was head baseball coach, assistant football coach and athletic director. After EAC, Bruce went to Weber State College in Utah and coached the basketball team to a runner-up finish in the 1958 Junior College tournament and a national championship in 1959, earning National Coach of the Year honors.