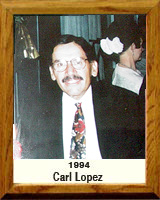 At Tucson High School, Carl “Scooter” Lopez played baseball on the state championship team in 1945. He also was a member of the 1944 Western Regional Championship Junior Legion team coached by Chuck Hollinger. Scooter hit the winning triple in the championship game that helped the team become the first American Legion team to play in the Junior Legion World Series. Lopez graduated from the University of Arizona in 1950, having played four years of baseball, including the last two under Coach J.F. McKale. He later played for the Howard & Stoff “Tigres,” managed by Ben Carbajal Sr., before eventually taking over the coaching reins for three years. After his playing days, Scooter umpired college and high school baseball, officiated fast-pitch softball and coached at Wakefield Junior High for several years. He still is involved in Little League Baseball. Upon retiring after 30 years as a Tucson Unified School District teacher, coach and administrator, Scooter became a high school principal in Ecuador for two years. During his South America sojourn he developed programs in soccer and basketball. Back in Tucson where he resides, Carl “Scooter” Lopez continues, as he puts it, “paying back for all the good fortune derived from being involved with young people and athletics.”