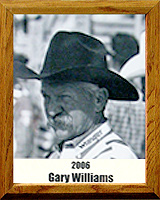 Gary is the first General Manager of the Tucson Rodeo. A native Tucsonan, he graduated from Rincon High School. He earned a business degree from the University of Arizona, but his love of being a cowboy and the rodeo kept him in Tucson. He started attending rodeo as a child because his dad played in a Western band that performed during the rodeo. This love for the sport resulted in Gary becoming a bull rider.

In 1996, after 71 years, the Tucson Rodeo Committee hired Gary as its first paid employee and its first general manager. As GM he is responsible for the overall everyday operations that includes securing sponsors, enlisting cowboy athletes to participate and putting on the biggest sporting event in all of Southern Arizona. While responsible for taking the rodeo forward into the 21st century, Gary is true to its historical roots and respects the traditions that it has had for more than three-quarters of a century.