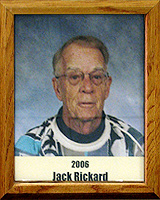 Born in Oregon, Jack graduated from Oregon State University (1952-57), earning a B.S. degree. He was sports editor for the Corvallis Gazette-Times from 1957-73.

During his writing tenure, he covered 31 Tucson Open golf tournaments, 25 LPGA tournaments and a number of Phoenix Opens. In 1972 he was recognized by the Oregon Press Association for “Best Sports Section” in the state of Oregon, and in 1995 was runner-up for Journalistic Excellence by the Golf Course Superintendents of America.

PCSHF member Coach Lute Olson says: “Jack is a class act. He has been a very positive member of the media in Tucson.” PCSHF member Armen Dirtadian says: “Jack’s longevity as a sports journalist in this community speaks for itself. Jack has been a wonderful asset in this city with his timely reporting and human interest stories. He is not only a reporter, but he cares very much about Tucson and its people. And he has a passion for sports. In 2007 Jack was inducted into the Arizona Golf Association Hall of Fame, the first journalist to be so honored in 30 years.