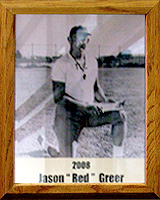 He moved to Tucson after one year of college in Arkansas and played football at the University of Arizona. He was an All-Border Conference defensive end (1931-33) for the Wildcats. Red also earned two letters as a Wildcat baseball player as an outfielder and catcher. After graduating, Red coached one year at Marianna, Ark., High School, two years at Prescott and then joined Tucson High School.

Red was inducted into the University of Arizona Sports Hall of Fame in 2006.