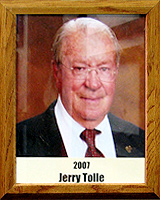 Jerry is part of the legacy of outstanding athletes at Tucson High School. He earned letters on the basketball and baseball teams in 1950 and 1951 and as a pitcher helped the Badgers win the state baseball championship in 1951 and 1952. He made the All-State team that year. Jerry was the recipient of the 1951 Frank Kempf Memorial Award (now called the Citizen Cup Award) as outstanding athlete of the year. He was a member of the National Honor Society for six semesters and junior class president in 1949-50.

After playing at the University of Arizona from 1953 to 1955, Jerry entered professional baseball in 1955 and then went into military active service in 1956. He did not resume his baseball career because of an elbow injury. J

erry coached Little League baseball and youth football for five years each and also officiated Little League in Tucson and Fort Knox, Ky., during his time in the service. As a golfer, Jerry won the Randolph Men’s club championship in 1963 and played on five Citizen Cup championship teams. He is a former winner of the Southern Arizona Best-Ball Championship and served as treasurer of the Randolph Men’s Club for five years. He also was active in bowling and served in a variety of capacities with the Tucson Bowling Association. He is a member of the Tucson Bowling Association Hall of Fame. Jerry also is active with the Catalina Rotary Club and Tucson Rodeo.