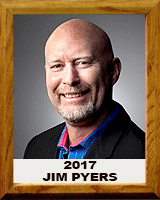 Jim played professionally in Switzerland and internationally. Jim Led the Swiss National league in scoring 2x, in 3pointers 3x, in Free Throw 6x and average over 30+ points per game for his career. Jim led his team in Lucerne (Reussbuhl) to the league’s best record and Swiss Championship finals in 1988.

Following his professional playing career, Jim coached professionally (1992-96) in Switzerland leading teams to winning records, and playoffs in each those 3 seasons.

Jim spent many years giving back his experience to youngsters including working in top U.S. and EU Basketball camps- Lute Olsen, Fred Snowden, Alvan Adams/Paul Westphal, Jim Peterson, Swiss All-Star ‘83-’87, and 2010- 2012 (largest basketball camp in Europe) and many others.

Jim graduated from GCU in 1984, with a degree in Computer Science and then ran his own software engineering business in Switzerland for more than a decade before returning to the U.S in 2000. Jim currently leads Customer Engineering for Qualcomm Life, a mobile communications business based in San Diego. Pyers is the brother of Santa Rita standout Paula Pyers, who starred at Santa Rita and USC and also played professionally in Switzerland.

Jim and Paula both had the privilege of playing for the same high school basketball coach at Santa Rita, Dave Lynch, a legend in Tucson basketball. Dave earned Arizona Coach of Year honors in both the 1979 and 1984 seasons.

Jim is married to Jasmin and has three children, one grandchild- and resides in the San Diego area.