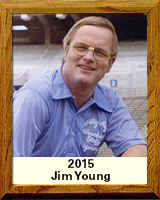 Jim Young will always be remembered as that bright young guy from Michigan who came out west, took over Arizona football in 1973 and set it ablaze. In later seasons, with later coaches, the Wildcats moved up to a higher league and began to take on opponents of wealthier tradition than the Wyomings and New Mexicos of the world, but it was Young who set the stage for big-time college football here. He put the Wildcats on the move to bigger and better things. With a world of ingenuity and enthusiasm, a young guy from Bo Schembechler’s staff at Michigan came to Tucson in 1973 and U of A football took of like a rocket across the desert sky.

The Cats had been losers in seven of the previous eight seasons until the quiet, scholarly looking gent rode into town. The next three Arizona teams went 8-3, 9-2 and 9-2. The Cats put up impressive wins against Wyoming – a rugged Western Athletic Conference opponent back then – Arizona State, Indiana, Iowa and a Texas Tech team that had owned the series with the U of A.

Young’s first staff at Arizona contained no fewer than three men who would become head coach of the Wildcats: Larry Smith (1980-86), John Mackovic (2001-2003) and Mike Hankwitz, who served as interim coach when Mackovic was fired during the 2003 season.

Larry Smith said the secret to the Wildcat’s turnaround under Young was hard work. “He believed we could outwork everybody,” said Smith. “We won a lot of games because we worked so doggone hard in practice. Jim Young was a great coach because he’s a great teacher. His organizational ability, his teaching and his preparation were always the best.”