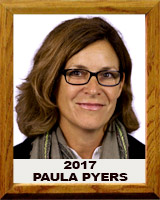 A four-year starter at Santa Rita High School, Pyers is one of the most prolific girls’ basketball players in Arizona history. In 1984, Pyers led the Eagles to a 28-0 season and the state championship. She averaged 28.9 points per game that season under Coach Dave Lynch, and led the Eagles in scoring, assists and steals.

In l999, Pyers was honored as Arizona’s Athlete of the Century for girls’ basketball Following her Santa Rita career, Pyers went on to play for the University of Southern California, who won back to back National Championships in 1983 and 1984. USC placed 2nd in the nation in 1984-8S, and Pyers led the Trojans to the Sweet 16 in 1986-87 and 1987-88 as team captain.