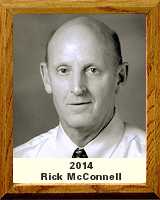 The Cougars were State Baseball Champions in both 1973 and 1974, with McConnell being named 1st Team All State Shortstop by the Arizona Republic in 1974.

Upon graduation from Sahuaro High School, McConnell earned a baseball scholarship to the University of Arizona. In 1976, he was on the Wildcats NCAA Championship team.

In 2011, McConnell obtained his 500th career coaching victory. Between them, father and son, the McConnells have amassed over an astonishing 1300 career wins.

McConnell and his wife Pam, have two sons. Like his father Dick McConnell, Rick has had the opportunity to coach both sons, Matt and Mickey. Matt McConnell is the assistant men’s basketball coach at Citrus College in California. Mickey has played pro-basketball in Italy for two years and is now with the Texas Legends, Dallas Mavericks D-league team.