In the Fall of 1961, Coach Tony Morales, an outstanding multi-sport athlete and baseball All-American, along with the experienced help of Assistant Coach John O’Dell (later head coach at Palo Verde High School), took a group of young men, honed their skills, taught them the value of hard work, conditioning, discipline and team play, and it paid off, for over the next few months that team accomplished something few teams in high school history had ever done. They finished with a perfect 21-0 record, the last game being the State championship.

The starting five of Ray Kosanke, Jesse Peoples, Chester Willis, Leroy Taylor and Mike Aboud had the luxury and backing of a great bench with Mike Butler, Don Bacon, Art Chapple, Joe Ortiz, Pete Samorano, Walter Frost and Edmund Tellez. What makes these achievements all the more impressive is that the team played its first four games without its 6’9″ star center, and in the last 13 games of the season after Kosanke’s return from injury, the team beat opponents by an average of nearly 24 points per game, beating Yuma High by 30, Rincon by 34, Mesa by 37, Salpointe by 27, Camelback by 29 and Amphi by 50 points. In that Amphi game, Kosanke scored 46 points. The game winner in the very close state championship game was scored by sharp-shooting reserve guard, Mike Butler, who, together with Jesse Peoples, held the opponent’s star player in check.

The All-City first team that year featured four Badgers: Kosanke, Peoples, Willis and Taylor. The fifth starter, Mike Aboud, was second-team All-City. Kosanke and Peoples were first-team All-State, Kosanke being the captain and Coach Morales the team Coach of that first-team. Many of the basketballers were also accomplished dual-sport athletes. Don Bacon, Mike Butler and Pete Samorano excelled on the baseball team; Jesse Peoples at 5’9″ not only could dunk a basketball but was also a 6-foot plus high jumper for the track team; Walter Frost was a fleet quarter-miler and Kosanke was the leading discus thrower for the track team. In that ‘61-62 season, Coach Morales not only had a first-rate team of athletes but also a group of quality young men who have remained treasured friends for nearly six decades. 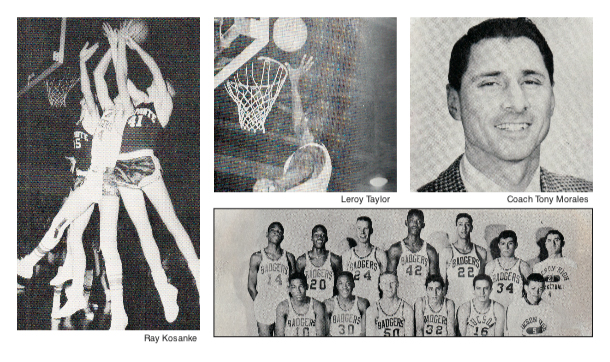