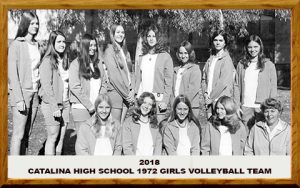 Ode to a Volleyball Team

There once was a coach called “Grump”
Who taught thirteen girls how to bump
Five Days a week, three hours a day It wasn’t too long, they were ready to play
First came a team all decked in red
But the Trojan team creamed them or least it was said
Next from the east came a group called Buena
But the Trojan team fought and stayed la ganadora
Then came the Bulldogs standing strong
CATALINA won (but the match was too long!)
At home again the Trojans did triumph
Beating Palo Verde and pleasing good “Grump”
Then came the game when the two top teams would meet
CATALINA played great; thus Rincon’s defeat!
Now the best team in the town
The undefeated Trojans put the Lancers down
Then a game that was easy to call
For the Sunnyside Devils had lost them all
Next a team as weak as the last
CATALINA was travelin’ and travelin’ fast!
Then came Cholla, a good team in its own
But CATALINA took another victory home
Time’s running out, only four games to go
Now there’s three. The Trojans beat C.D.O.
Then to Pueblo. They had good serves
A win for the Team; a case for the nerves
Then came the game most waited for
By great playing, CHS drove Sahuaro in the floor
The last game of the season against a good friend
It took three games, but CATALINA won in the end
Into the Divisional Tournament they soared
And accepted the trophy as the Trojan fans roared
One week to practice, one week to play
For the State Tournament was just one week away
The Trojans traveled to Marcos de Niza
Where they took the Championship con mucha prisa
Now at CATALINA sits a trophy or two
That’s what coaching, teamwork, and S-P-R-I-T can do.
— Juanita Hutton, 1972 Captain, Girls’ Volleyball State Champs